Silver Linings: Your cannabis business matters more now than ever before

As an analyst, I spend a lot of time creating quantitative models that attempt to provide some insight into humans and their decision-making processes. In the real world, all basic assumptions of economics are off. Our minds are flooded with fears, aspirations, expectations, and emotions that lead us to make completely irrational decisions that can’t be captured in numbers.

As the dust settles from the presidential election, it’s more clear than ever that these collective decisions often lead to tangled social problems and systems that exacerbate our fears and anxieties. Cannabis prohibition was no exception. The victory of cannabis at the ballot box in November is a powerful flame as we enter a new year and an uncertain era of freedom in the federal political sphere. These newly legalized adult-use markets (in California, Massachusetts, Maine, and Nevada) and medical markets (in Florida, North Dakota, Montana, and Arkansas), represent a strong movement out of prohibition and emphasize the power of grassroots community activism in a federalist governmental system.

I am convinced that the cannabis movement is and will continue to be a powerful catalyst for social change and a necessary conduit to freedom, economic development, and community empowerment. If you are working in this industry or considering an entrepreneurial endeavor, your business means more than ever before. Here is why:

On Veteran’s Day, three days after the election, Veterans for Natural Rights (VNR) and the Veteran Farmers Alliance (VFA) hosted an event to give away free cannabis to veterans in Colorado Springs. The annual event was designed to raise awareness for the prevalence of PTSD among military veterans, but due to the event’s nature and timing, it became a rare post-election gathering—a peaceful assemblage of individuals from very polarized political factions. 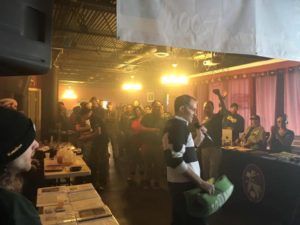 “Veterans run the gamut,” said Matt Kahl, the founder of Veterans for Natural Rights and a veteran who came back from Afghanistan with PTSD. “There are a lot of people that go to war and they come back with an intense hatred of the state and an intense hatred of war. Sort of a pacifist route. Then, we come across veterans who are extremely right-wing. They have a strong belief in authority and structure and the idea of government security.”

We have become a nation sharply divided by our politics. But cancer, epilepsy, PTSD, and chronic pain do not discriminate across party lines. Cannabis patients and users come from a range of socioeconomic, political, religious, and educational backgrounds. The Veterans Day event was a microcosm of a larger, more abstract gathering that needs to take place in the United States. In order to begin having nuanced conversations about freedom, health care, and social and economic issues, we must first find ways to come together over common ground.

“Veterans have an advantage over civilians in this regard,” said Kahl. “We didn’t get to pick our units. It doesn’t matter who they are, when someone is hurt, you need to go get them. We know when it’s time to put aside our political beliefs.”

Freedom is an abstract concept, but the way we experience it is deeply personal. In its presence, we scarcely notice it but its absence can infringe on our personal safety, comforts, and health.  The legalization of cannabis has given thousands of people access to a newfound freedom that has contributed directly to their quality of life. It is a veteran who can smoke a joint without worrying about losing his health insurance. It is a mother who has run out of treatment options for an epileptic child’s seizures. When a door to freedom opens, it’s an opportunity for an individual to understand that life is better without restraints or imposed shackles from top-down power sources that are unfamiliar with your personal struggles.

“It’s an epidemic in the cannabis community,” said Kahl. “Most people are diametrically opposed to the idea of marijuana until they or someone they know they needs it. Then, they begin to question the web of lives they’ve been told about it their entire lives”

Perceptions about cannabis have shifted relatively quickly over the past few years. Although access to marijuana may not resonate with everyone, this change in public perception could be a greater conduit to questioning the origin and reasoning behind other systems, rules, and beliefs that have been accepted as the status quo. This type of moral evolution— which begins by asking “what were we thinking?— could have profound spiral effects beyond this industry.

Prosperity and financial security are a necessary means of survival. When individuals are unemployed, insecurities stir. This paves the way for politics rooted in fear.  The cannabis industry offers a number of opportunities to spur employment and economic growth in states across the country. The legalization of cannabis in these seven new states could create more than 83,000 new full-time equivalent (FTE) jobs[1] over the next three years, approximately 70% of these positions would be created by licensed cultivation, dispensary, and manufacturing businesses and 30% of these positions would be created by intermediate input purchases made by the cannabis industry for general business goods and services, and through general spending by marijuana industry employees and proprietors.

Underneath the blanket of red states that lit up CNN on Election Night are millions of disempowered humans wanting to work, earn a paycheck, and provide for their families. The cannabis industry has the power to give people these opportunities. 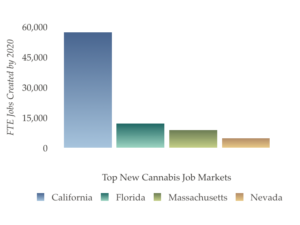 The cannabis industry exemplifies the power of civic engagement in a federalist system of government. The wave of legalization has illustrated how community leaders do hold power against the federal government. Grassroots campaigns at the community level sparked the end of prohibition; there were never federal leaders standing by to grant permission. Powerful change happens when communities decide to take action. I am always inspired by George Orwell’s essay Freedom of the Park, which in essence, declares that we decide what freedoms are ours.

“The point is that the relative freedom which we enjoy depends of public opinion. The law is no protection.”

As we move forward into this new year, creating a values-driven cannabis business is more critical than ever before. I’m honored to be writing to you and I thank you for your work in this industry. We vote every day with our choices, and your spark elevates the collective.

[1]  Data utilized to calculate potential job growth was based on “The Economic Impact of Marijuana Legalization in Colorado”, published in October 2016 by the Marijuana Policy Group. Data calculating market growth in new markets between 2017 and 2020 was drawn from “The State of Legal Medical Marijuana Markets: Fourth Edition,” published by Arc View Market Research and New Frontier Data.