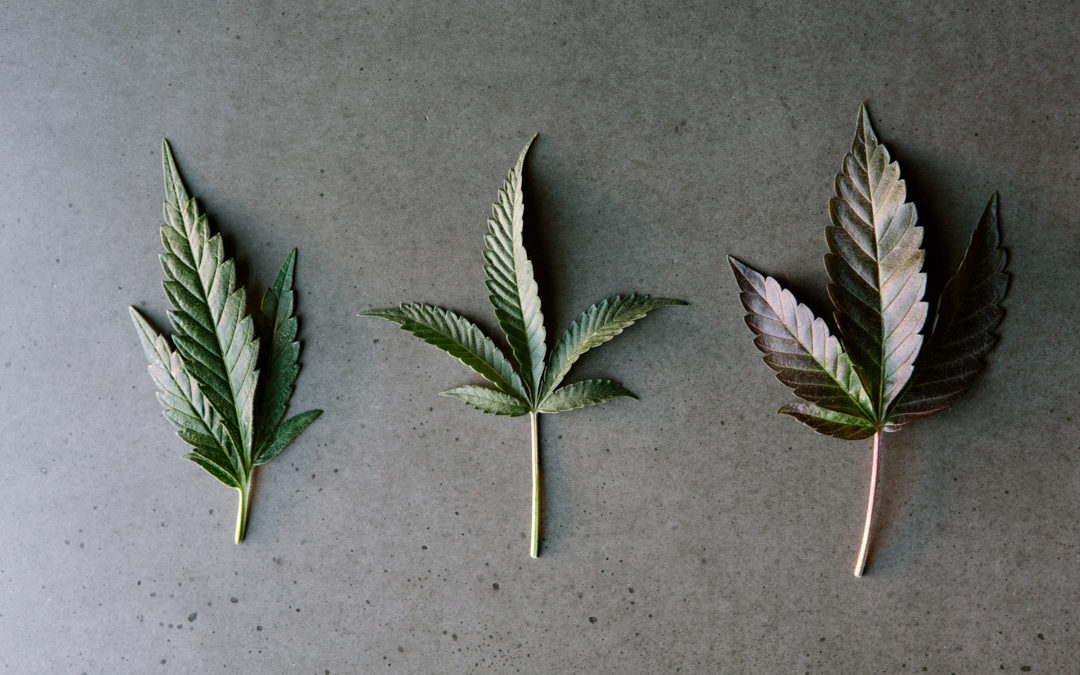 Luxury cannabis brands have been having a moment in the media. But as these businesses compete to land on dispensary shelves, the best business and investment opportunities are brewing behind the scenes. Cannabis is an active agricultural industry, with significant room for improvement in technological and scientific innovation.

Despite the billion-dollar market growth in the cannabis industry over the past few years, there has been little progress in our scientific understanding of the plant. Why does an OG Kush strain from one dispensary make you feel mellow, while another may make you fall asleep? What’s the difference between Girl Scout Cookie, GS Cookie, and GSC—a few of the hundreds of presumably related strains sold on the Washington market? Which dispensary is selling the “real” genetic lineage of Blue Dream?

“Many of the cannabis variety names today are inaccurate,” Karassik said, elaborating on some of the obstacles facing the industry. “Growers rename varieties because they think they will sell better or because they just don’t know what they really have.”

Packaging and accessories only go so far in determining a consumer’s experience with cannabis. Without a better understanding of the genetic sequencing of cannabis strains, consumers’ experiences will continue to be predictably unpredictable. Incorporating modern scientific techniques and tools into the cannabis industry could create more consistent and enjoyable experiences for consumers, reduce costs for cultivators, and elevate the cannabis experience for everyone. In this study, we’ll examine.

Why is the cannabis industry so far behind traditional agriculture?

For the past several decades, cannabis cultivators have been more concerned with avoiding police raids than investing in genetic research and breeding. The Drug Enforcement Administration only recently ended an imposed monopoly on growing cannabis for federally legal studies. The National Institute on Drug Abuse had collaborated exclusively with the University of Mississippi to grow cannabis for studies for 48 years, which made conducting agricultural cannabis research nearly impossible for scientists in academia.

But despite the stereotypes of black market basement growers, cannabis cultivators are no strangers to innovative breeding techniques. In 2011, the Stanley brothers made national headlines when they introduced Charlotte’s Web—a hybrid between marijuana and industrial hemp that provides CBD relief without psychoactive effects. In Denver, some dispensaries will introduce new strains every few weeks, keeping a fresh variety of products for its customers.

“The industry is built on novelty,” said Karassik. “Cultivators and dispensary owners are trying to differentiate themselves. They’re trying to say that they’re unique instead of accentuating the way they’re growing it.”

The desire to produce new and innovative strains has taken priority over “inbreeding” which is the process of breeding genetically related members of a species to eliminate undesirable characteristics. As the Stanley brothers exemplified, “cross-breeding”– which is essentially crossing two existing plants to create hybrid seeds– creates waves in the cannabis industry. While scientists have focused on breeding tomatoes to optimize them for traits like pest-resistance and drought-tolerance, cannabis breeders have mainly focused on characteristics that will be popular with consumers, mainly cannabinoid content and terpene profiles.

The result of this lack of inbreeding has led most cannabis strains to have “unstable” genetics, which makes offspring susceptible to extreme variability and unpredictability. This explains why cultivators grow plants from clonal mother plant cuttings, rather than seeds or tissues cultures as they do in traditional commercial agriculture.

This focus on crossbreeding over inbreeding also creates higher risks and higher costs for producers. Gorilla Glue #4, for instance, earned first prize at the 2014 cannabis cup in Los Angeles and Michigan for its potent THC levels. However, creating the “heavy handed euphoria” that this particular strain is known for has come at a cost: higher production costs due to a weak stalk, which is not able to hold the weight of the mature flower.

How can scientific research and techniques improve the cannabis experience for patients, consumers, and cultivators?

Without genetic testing, there is no way to guarantee consistent products for patients and customers. This creates serious challenges for patients seeking consistent medication to treat the vicious symptoms associated with cancer, HIV/AIDS, and epilepsy.

“When a patient finds a cannabis variety that works for their ailment, the most important thing for them is to continue purchasing that same variety,” said Karassik. “Unfortunately, when there is no genetic testing a patient may never be able to find that same variety again.”

Variations between plant varieties can alienate casual or first-time users. Adult-use consumers often expect the same consistency from cannabis they would get from a bottle of wine. However, unpredictable experiences for new cannabis users are often the norm. We’ve all heard stories of a friend who took a hit to quell anxiety before a party and then ended up falling asleep. Some of this can be accounted to individuals’ unique brain chemistry, but much of this is due to the variance and unpredictability of strains sold on the market.

“Many irregular or ‘yeah in college’ users aren’t as willing to experiment with a few hours to get an experience they don’t like,” said Karassik. “If we make the wrong choice, we get an unexpected experience and we are stuck for a period of time. No one wants to waste hours being paranoid instead of giggling.”

Our lack of data on the genomics lineage of strains also puts a ceiling on the cannabis strains and products we could potentially access in the future. Growers can continue to pop seeds and get lucky with some innovative hybrids. But there could be hundreds of thousands of possibilities that we might not even be able to fathom without a better understanding of genetic sequencing.

“You look at Blue Dream—which is popular—but part of the reason it’s popular is because it’s easy to grow, pest-resistant, and produces high yields,” said Karassik.

Blue Dream “has achieved legendary status among West Coast strains,” but Karassik brings up an interesting point. Is Blue Dream really the best we can do? Genetic breeding could lead to new and innovative strains with effects that we may not even be able to fathom with the level of research and scientific knowledge we currently have. The founders of Phylos Bioscience believe in a future where cannabis strains have regulated and consistent THC levels, concentrated levels of anti-inflammatory cannabinoids, and recognizable scents, like oranges and chocolate. 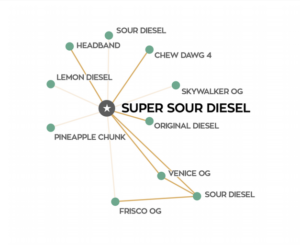 Genomic mapping and plant stabilization could also present substantial cost savings for cultivators and help them replace the cloning process with more modern methods of plant propagation. Cloning is a risky process and can transfer health and pest issues plaguing the mother plant, which can potentially spoil an entire grow-house.

If cannabis plant genetics stabilize, cloning could become a technique of the past. Cultivators could move towards production from seeds or tissue cultures, like most agricultural crops. This would lead to less risk and lower probability of pathogens and plant failure. It would also prevent growers from purchasing the wrong types of clones from unethical clone growers, who may be selling clones under the wrong names.

What are the obstacles in closing this “80 year” gap?

The cannabis industry is still in its infancy and we are early on the innovation adoption curve. Education and public information about the plant is often not accurate and dispensaries often prioritize short-term marketing and branding strategies over consumer education. The complex genetic lineage of strains have been tossed aside in favor of two consumer-friendly broad categorizations: “Indica” and “Sativa.”

“Many people aren’t aware of why they have such different experiences with the same ‘name’, not yet realizing they are consuming different plant varieties,” said Karassik.

The first step to closing this “80-year” gap is to focus more on the agricultural element of the cannabis. Raw cannabis flower is sometimes compared to fine wine or champagne, but in reality, it would be more apt to compare to a tomato or apples. In wine and champagne, the processing and aging method is key to the product’s quality and consistency, while in cannabis, the consistency and quality is heavily dependent on the genetics and growth conditions of the plant.

As consumers move along the innovation adoption curve, Karassik anticipates that their demands will shift as well. In the next few years, patients and customers may peruse dispensaries seeking a particular genotype of cannabis, just as they may seek out a Fuji apple over a Red Delicious apple at the grocery store.

“Because we have a system for identifying and naming varieties accurately, we take this ability to purchase and compare most fruit with confidence,” said Karassik. “With cannabis, the stakes are much higher than eating one bad apple.”

Karassik believes the industry will catch up in its own time as consumers’ demands and expectations shift, the market grows more saturated, and cultivators need to find ways reduce their costs. He envisions a future with genomic and non-GMO-marker assisted breeding tools for cannabis cultivators, a diverse and ever-growing selection of strain varieties, and friendly technology that allows consumers to verify the genetics of their purchase

“This is the beauty of good technology, once we have completely embraced it, we find it difficult to conceptualize life without it.”