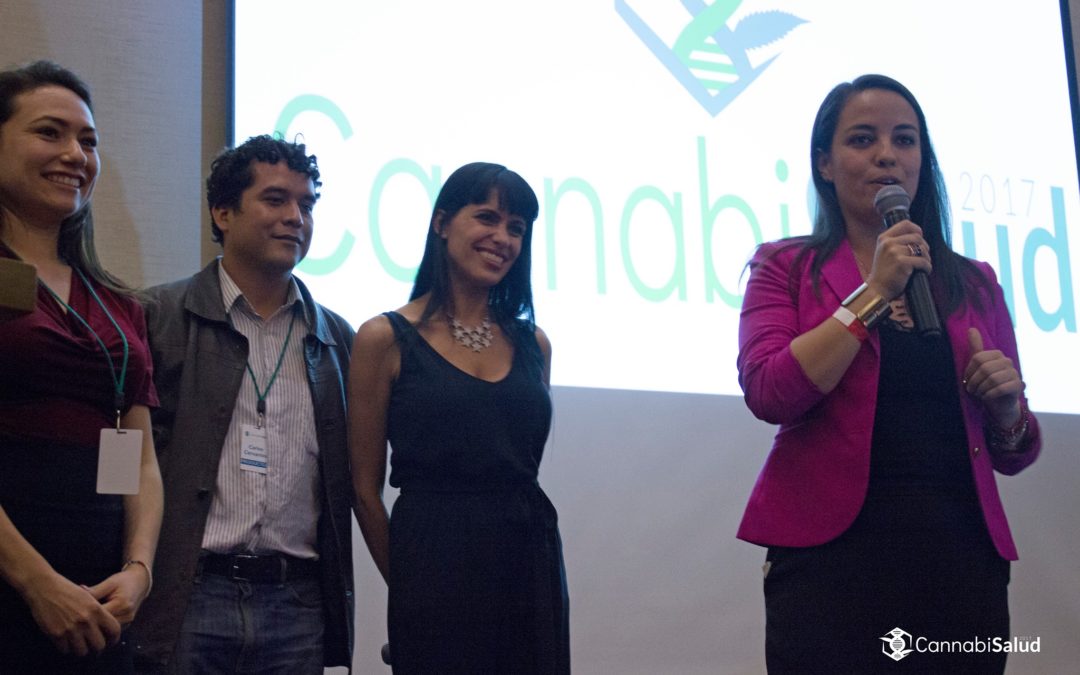 Last weekend, scientific researchers, patients, activists, physicians and cannabis businesses from all over the world gathered in Guadalajara, Mexico for CannabiSalud. This conference was the first of its kind—a Latin American symposium dedicated to medical cannabis education—and demonstrated that the international boundaries, which separate cannabis businesses and scientific research, are quickly dissolving.

CannabiSalud was the brainchild of Lorena Beltran, a cannabis advocate and longtime sales representative for Charlotte’s Web. A native of Chihuahua, Mexico, Beltran witnessed the evolution of the industry in Colorado and had dreamed of bringing cannabis education to her home country for years. The content shared at CannabiSalud has been been decades in the making: scientists analyzing petri dishes in their laboratories; parents trying pharmaceutical drug after drug for their children; and physicians reluctantly surrendering Western medical ideology in favor of plant-based medicine. The research, data, and stories shared were individual threads that wove together a powerful and evidence-based narrative in support of the cannabis plant.

Here are five key takeaways from the CannabiSalud conference that underscore where this global industry stands now and offer insight into where it is headed:

Families are Leading the Legalization Movement.

This was no adults-only conference. Perhaps the most important attendees were the patients wearing protective seizure helmets or the mothers pushing their children from booth to booth in wheelchairs. Dozens of patients and their families came to Guadalajara to learn more about the cannabis medical treatment options for epilepsy, autism, multiple sclerosis, cancer, and other conditions. Throughout history, maternal activists have been a fierce and effective force in enacting legislative change. Consider the role Mothers Against Drunk Driving played in raising the drinking age in the United States. The recent wave of legalization in Latin America has been no exception. Colombia, Argentina, and Mexico have all legalized medical cannabis in the past 8 months, mostly due to intense pressure from the families of epileptic patients.

“It’s how I make sense of the ten years of suffering,” said Heather Jackson, a mother of a child with Doose Syndrome and the Founder of Realm of Caring, who spent a decade trying various pharmaceutical treatments for her child.

Jackson shared her experiences and insight from working with patients seeking medicinal cannabinoid therapy and collecting data through the Realm of Caring’s innovative observational research registry. With dispensaries on every block in Colorado, it can be easy to forget the taboo surrounding cannabis in other parts of the world. Fearless families are forging this movement for legalization ahead as they seek the best treatment for their children.

Research will be led outside of the United States.

The United States may be leading the world in cannabis sales—with its trademark capitalistic flair– but other countries are years ahead in regards to scientific and medical research. On the first day of the conference, Dr. Michael Dor— the Senior Advisor for the Medical Cannabis Unit of the Israeli Ministry of Health—presented his findings from the clinical trials he has been conducting on patients in Jerusalem for the past ten years. Dr. Dor and his team found substantial evidence supporting the therapeutic benefits of cannabis for patients suffering from cancer, epilepsy, Parkinson’s, chronic pain, fibromyalgia, and a wide variety of neurodegenerative disorder. Dr. Dor credits Israel’s competitive advantage in research to Dr. Raphael Mechoulam, a molecular biologist who became the first scientist to isolate the active cannabinoids from the cannabis plant in the 1960s. 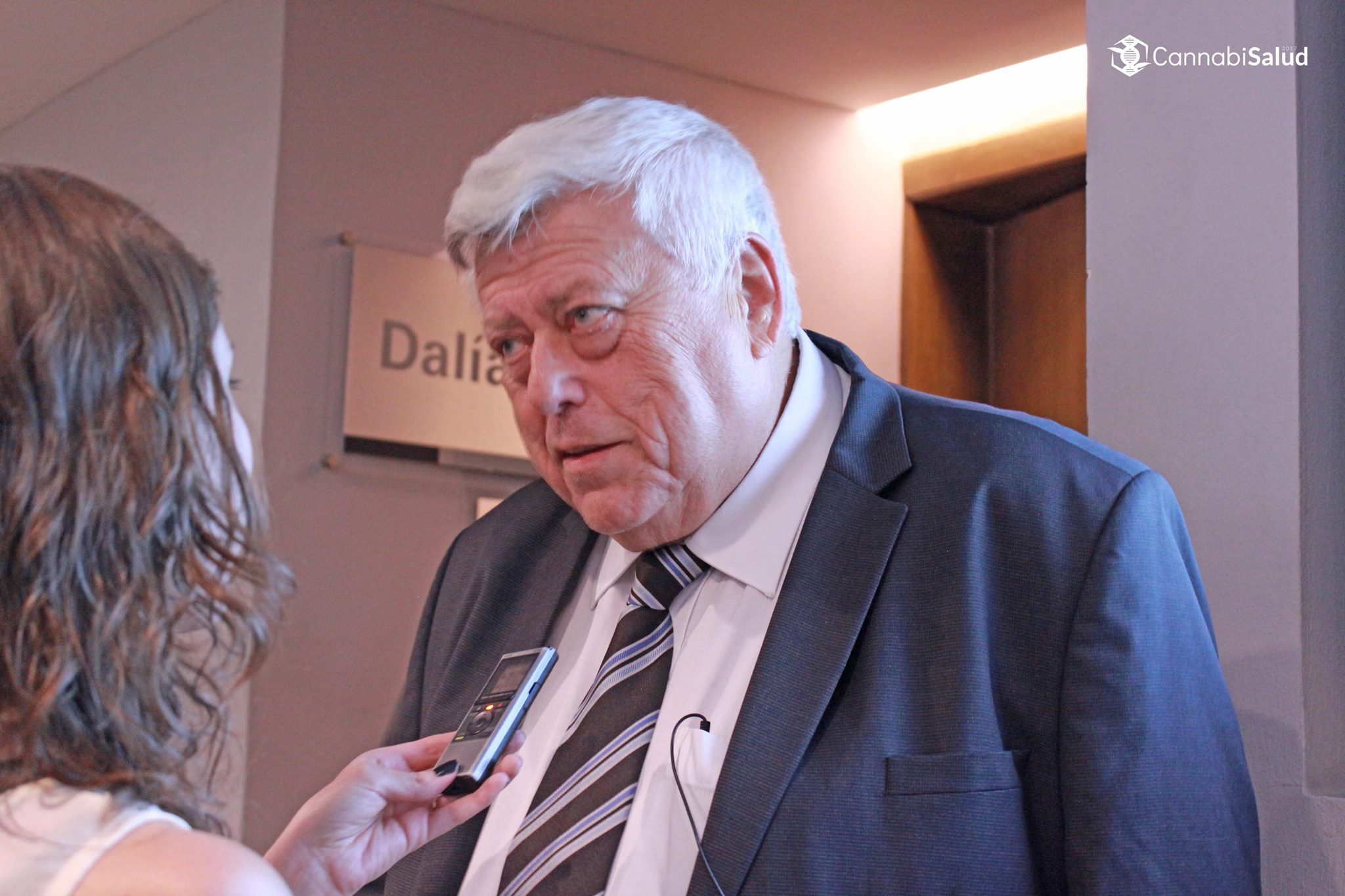 Dr. Michael Dor in an interview. Photo by CannabiSalud.

The United States still categorizes cannabis as a Schedule 1 drug with no medicinal benefit, and the Drug Enforcement Administration only recently ended an imposed monopoly on growing cannabis for federally legal studies. Although studying cannabis has been nearly impossible for academic or medical researchers within the US, the lack of supportive data is not a viable excuse to not recognize cannabis as medication. Dr. Dor shared droves of evidence from his clinic in Israel and even provided data on his recommended dosage amount. (Thirty-three grams of flower per month per patient should be more than sufficient.) When the United States revises its regulatory structure, there will be plenty of researchers chomping at the bit to launch projects. But until then, scientists and investigators in Europe, Israel, and South America will likely be the leaders in the effort to better understand the cannabis plant and its medicinal effects.

Every scientific researcher and business owner seemed to be in agreement on one topic: the whole cannabis plant is better than its parts. This idea is nothing new. The “entourage effect”—which was originally presented by Israeli scientist Dr. Mechoulam in 1998—theorizes that cannabinoids, terpenoids and flavonoids all work together to contribute to the therapeutic effects of cannabis. Isolated cannabinoids simply are not as effective.

Modern research emerging from different parts of the world is supporting and even building upon this hypothesis. Dr. Cristina Sanchez, a molecular biologist from Complutense University in Madrid, Spain, presented her research on the potential of cannabinoids, specifically THC, to act as antitumoral agents on cancer cells. Her laboratory findings, gathered over the past 15 years, indicate that whole plant cannabis extracts are more effective at killing cancer cells than isolated cannabinoids. 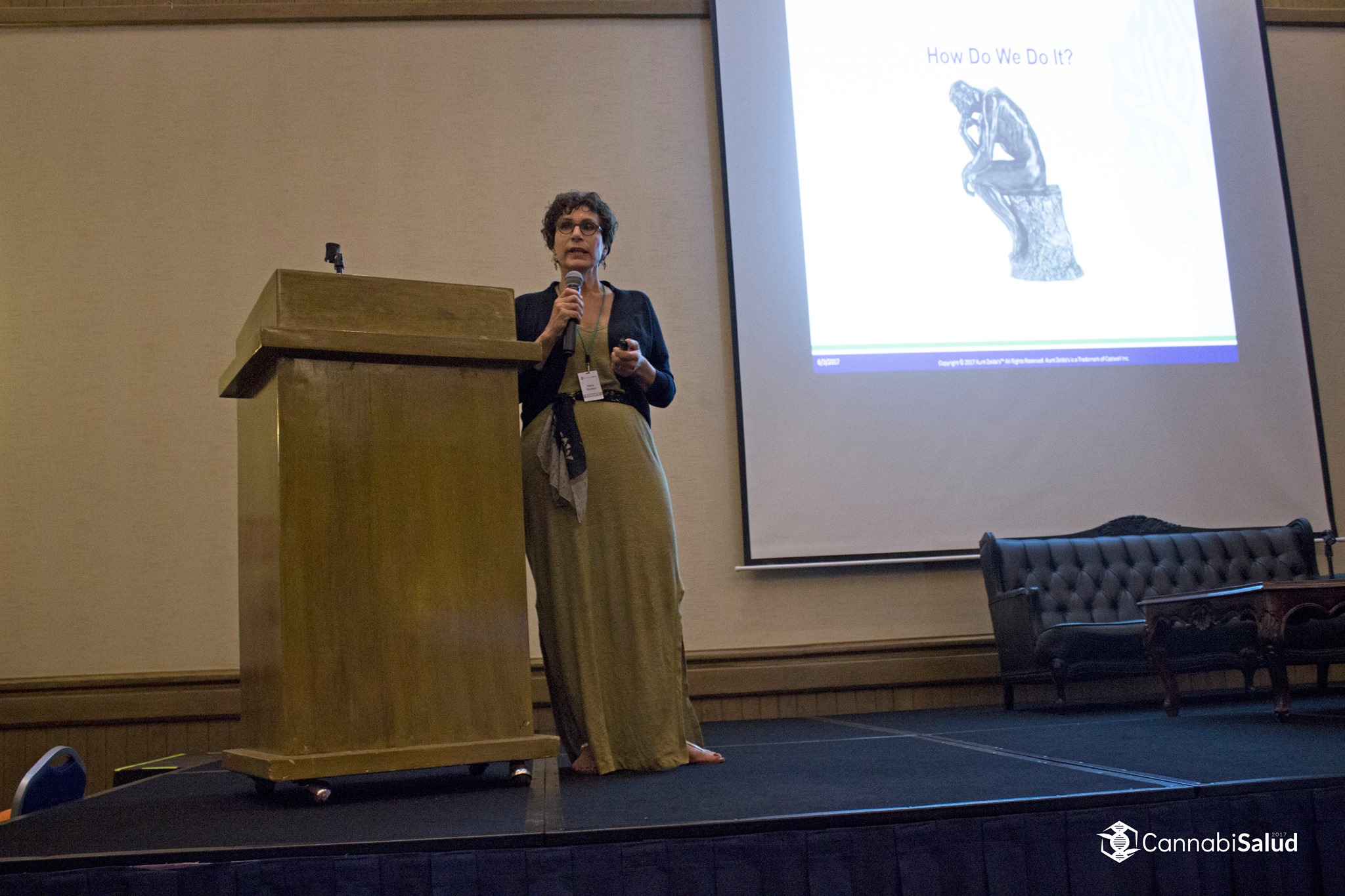 Mara Gordon speaks on the Entourage Effect. Photo by CannabiSalud.

Mara Gordon, the founder of Aunt Zelda’s and Calla Spring Wellness, brought up some implicit evidence in support of the entourage effect. “Marinol has no street value,” she said, explaining that THC is very unpleasant to digest on its own. According to Gordon, Marinol—a pharmaceutical drug with synthetic THC—has an extremely low repeat prescription rate among patients and no value on the black market. Gordon has been collecting data on patients in California for several years and theorizes that terpenes, such as limonene and myrcene, contribute to the therapeutic and pleasant effects of cannabinoid compounds.

For years, cannabis has been swept into two consumer-friendly broad categories “indica” and “sativa.” Cannabis plants with narrow leaves were considered sativas, while their fatter-leafed counterparts were considered indicas. Dr. Daniela Vergara, an evolutionary biologist and co-founder of the Cannabis Genomic Research Initiative (CGRI), has been conducting research with her team at CU Boulder to dispel these generalizations. Vergara’s research compares the phenotypes of cannabis plants– the physical observable characteristics- with their chromosomal regions to identify the major genetic differences between plant strains. Her results have illustrated genetic variations between strain lineages that were previously thought to be linked. She also presented data indicating that the majority of strains sold in dispensaries are unlikely pure “sativa” or pure “indica” and have been intercrossed many times. Genomic mapping for cannabis plants is still in its early stages and this research will be key to creating genetically stable, consistent, and effective cannabis products for the international market. As I’ve mentioned in a previous post, within the next few years, patients and customers may eschew the indica and sativa categorizations altogether and peruse dispensaries seeking a particular genotype of cannabis.

Perhaps my favorite moment from the conference was witnessing a series of hand motions and broken English and Spanish between Jessica Peters of Moxie Meds and a patient from Guadalajara. International cannabis conferences are delightfully chaotic, with content presented in different languages and murky regulations that vary from state to state, district to district, and country to country. Legislation and regulations around the world are evolving very quickly and this gray area of uncertainty presents a deep well of opportunity for entrepreneurs, researchers, and investors. 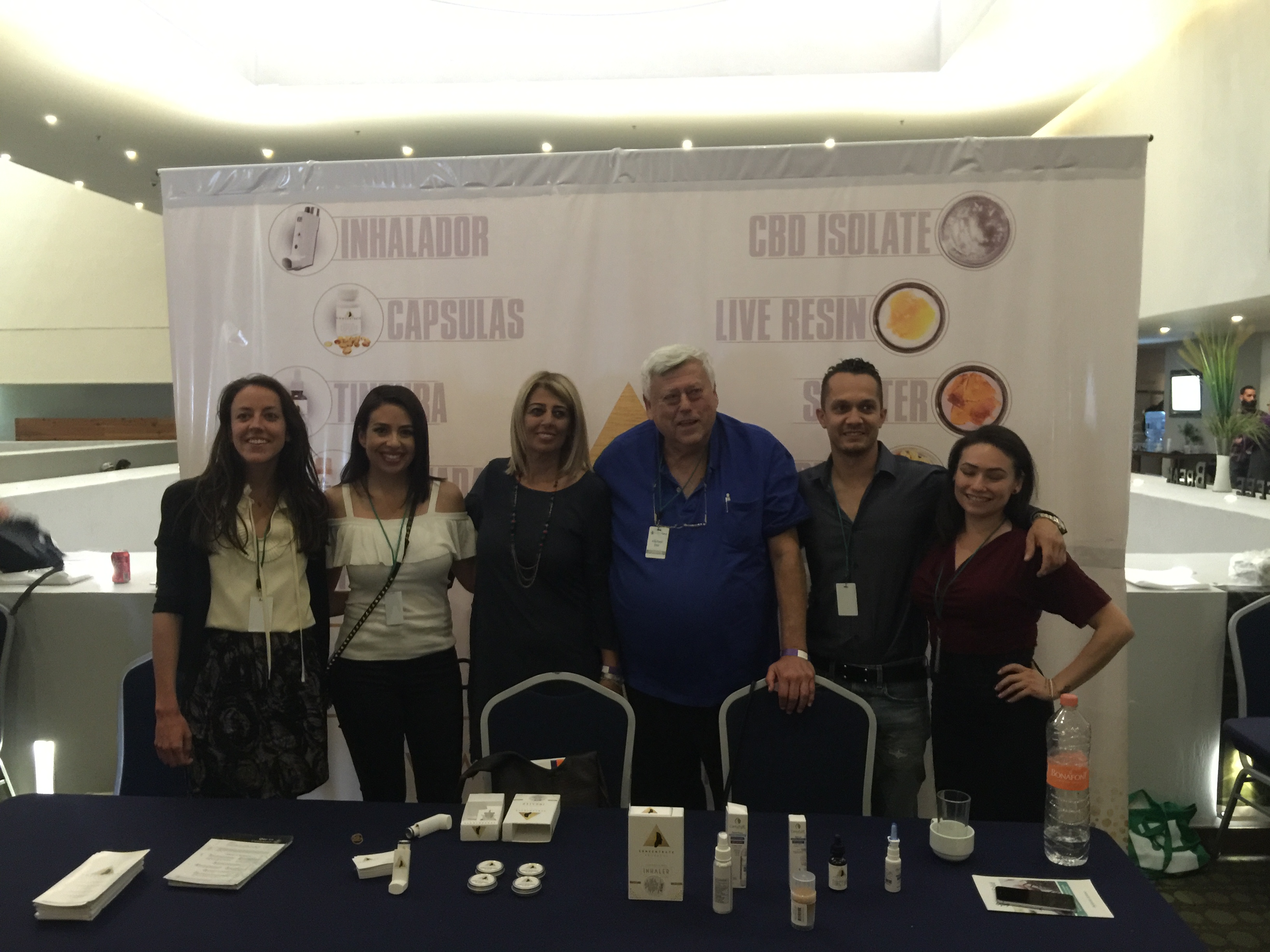 With some of the team of Concentrate USA, a business dedicated to creating pharmaceutical grade cannabis products for the international market.

My key takeaway from CannabiSalud: think about this industry with a global lens. The artificial boundaries separating cannabis businesses, legislation, and research are quickly dissolving. This is a global market and the legislative and regulatory structure that we have become accustomed to today will likely be reinvented by tomorrow. Be prepared to evolve accordingly.